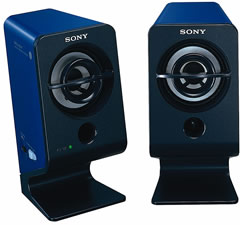 Sony Corporation Japan has announced “SRS-A201F” active speakers for mobile phones. The speakers with color variations to match with W41S” CDMA 1X WIN mobile phone that is scheduled to be released by Sony Ericsson Mobile Communications in late January. These models support the new music service, “LISMO (LISTEN MOBILE SERVICE),” and have enhanced audio playback capabilities. Included is a flat-style plug for use with mobile phones to stereo mini plug conversion cord. Since the input for speakers is stereo mini, they can also be connected with other devices such as portable audio players. The amplifier has a maximum output of 1W x 2ch.