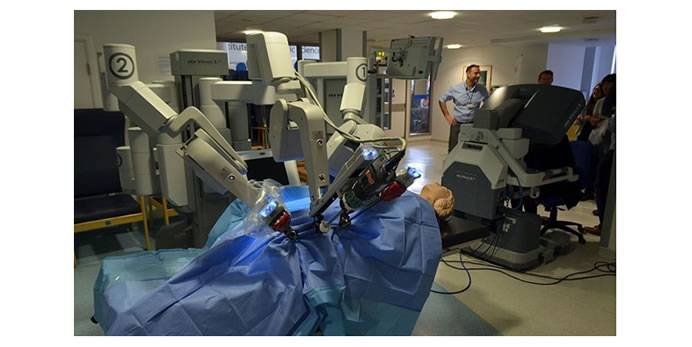 A research team led by Park Suk-ho, a professor at Chonnam National University in South Korea has developed 20-micrometer-sized robots for medical purpose, which track and treat cancer at the same time, for the first time in the world. The micrometer-sized robots for medical purpose combat solid cancers, such as colorectal cancer, breast cancer, stomach cancer, liver cancer and pancreatic cancer, by using macrophages injected with anti-cancer drugs. The robots are actually macrophages, white blood cells that engulf and digest pathogens, part of the human immune system.

Using this property, scientists let macrophages devour nanoparticles (NPs) previously injected with anti-cancer drugs, creating cancer combatants. The micrometer-sized robots can play a role as agents for drug delivery, which raise the effectiveness of anti-cancer drugs, and immunotherapy, which is known as the safest anti-cancer therapy. Until now, doctors have usually penetrated cancer cells through blood vessels when using NPs as drug delivery agents.

However, the existing method has problems that drug molecules can’t travel to the central region of a tumor since the growth rate of cancer cells is faster than the rate of angiogenesis. Moreover, immunotherapy costs a lot and takes a long time. The new 20-micrometer-sized robots have solved the problems. With magnetic nanoparticles (MNP) which are controlled by magnetic fields outside a patient’s body, the robots reach around a tumor. Then, macrophages infiltrate to the central region of a tumor and kill cancer cells by emitting anti-cancer drugs. It means the robots can provide chemotherapy and immunotherapy using immune cells at the same time.
Source:-