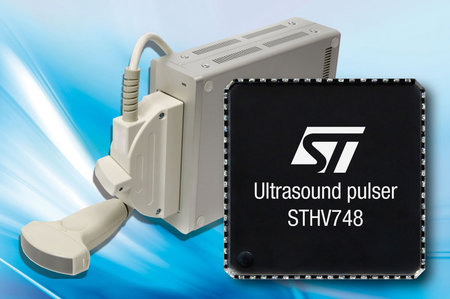 The STHV748 provides four independent channels, each of which generates precisely controlled high-voltage pulses to drive piezoelectric crystals or other transducers. By integrating the transmit/receive switch, the STHV748 minimizes the number of external components required in applications such as stationary and portable ultrasound scanners, allowing further miniaturization and cost reduction. The ultrasound scanner works on the same principles as radar. A piezoelectric transducer emits a burst of ultrasound waves when stimulated by a high-voltage electrical signal and, in turn, generates a low-voltage electrical signal in response to the echoed reflections of ultrasound waves from, for example, soft body tissues. The role of the STHV748 is to provide the accurately timed high-voltage pulses that generate the ultrasound burst and switch to receive mode to detect the echoed signals.