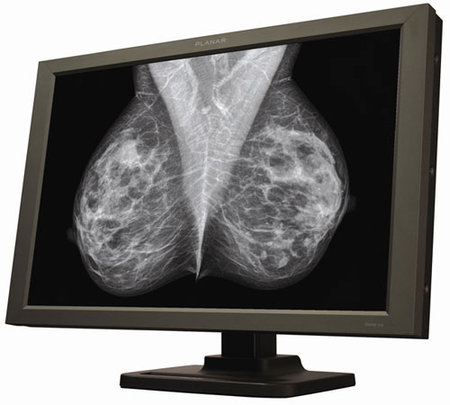 NVIDIA Corporation and Planar Systems are cooperating closely to produce display systems that will enable doctors to more effectively screen for breast cancer. The two companies are working to develop high-contrast, 10-bit grayscale display systems for use in mammography and other medical applications. Instead of developing specialty hardware, NVIDIA and Planar have developed a method of “pixel packing” that allows 10-bit or 12-bit grayscale data to be transmitted from an NVIDIA Quadro graphics board to a Planar Dome display using a standard DVI cable. Instead of three 8-bit grayscale channels, now two 10- or 12-bit channels are transmitted, providing up to 864 possible shades of gray at more than three times the image contrast of an 8-bit system.

Currently, digital mammography displays that rely on standard PC workstations are limited to 8-bit grayscale, which provides only 256 possible shades of gray for each pixel. Being limited to 256 shades-of-gray can sometimes obscure valuable data when an image is displayed; mammography systems and other medical sensors, however, are capable of greater degrees of contrast.