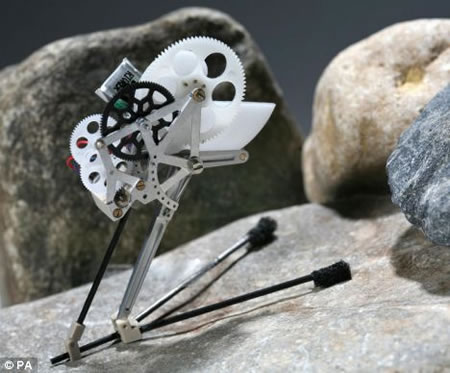 This Grasshopper robot can leap 27 times its body length!

The Laboratory of Intelligent Systems (LIS) directed by Prof. Dario Floreano focuses on the development of robotic systems and artificial intelligence methods inspired by biological principles of self-organization.
They have developed a Grasshopper robot which can leap 27 times its body length. The device, which looks like the workings of a watch perched on two long feet, weighs just seven grams. However, it can jump 1.4 meters – 10 times further for its size and weight. Animals such as fleas, locusts, grasshoppers and frogs use elastic storage mechanisms that slowly charge up jumping energy in their limbs and then quickly release it.The system allows these creatures to achieve very powerful jumps and extreme accelerations. The jumping robot employs the same principle, charging two torsion springs by means of a small motor and a cam.

To optimize performance, the legs can be adjusted for jumping force and take-off angle. A tiny on-board battery allows the robot to make up to 320 jumps separated by three second intervals. These tiny jumping robots could be fitted with solar cells to recharge between jumps and deployed in swarms for extended exploration of remote areas on Earth or on other planets. Similar jumpers could be fitted with tiny sensors to explore rough, inaccessible terrain or to help in search and rescue operations. The Laboratory of Intelligent Systems has developed a series of vision-based robots, with weights between 1.5 and 30 grams, capable of flying indoor without human intervention.