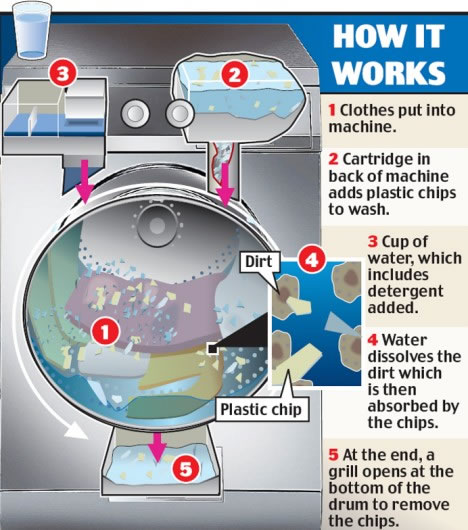 This Washing machine carries out a full wash with just one cup of water!

A washing machine that uses only a cup of water to carry out a full wash, leaving clothes virtually dry, has been developed by British inventors. The machine, which has been created by academics at Leeds University, works by using thousands of plastic chips – each about half a centimeter in size – to absorb and remove dirt. Around 20kilos of the chips are added to each load, along with a cup of water and detergent. During the washing cycle, the water is heated to help dissolve the dirt, which is then absorbed by the plastic chips. The chips should be removed at the end of each wash, but can be used up to 100 times – the equivalent of six months washing.

Researchers say the technology, which uses less than 2 per cent of the water and energy of a conventional machine, could save billions of litres of water each year. The average UK household uses approximately 455million litres (800million pints) of water a day – enough to fill 145 Olympic sized swimming pools. More than two million washing machines are sold in the UK each year. The technology, dubbed Xeros is currently in the design and testing stage. The inventors are in talks with a commercial partner. The machine could be on the market as early as next year.