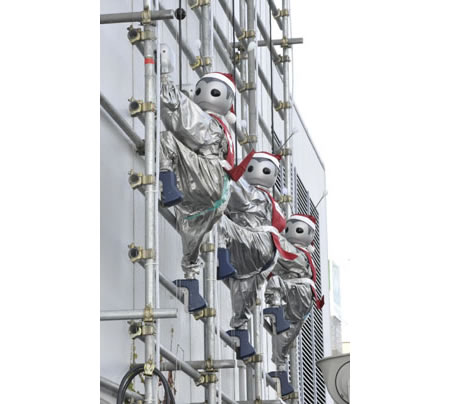 Three humanoid robots that famously climbed the walls of the Japan Pavilion during the Shanghai World Expo earlier this year scaled the wall of a building in Osaka while dressed as Santa’s. Wearing red hats and robes, the 1.4-meter-high robots, named Dream ROBO, climbed up and down a 10-meter-long ladder. The robots, jointly developed by 15 small and medium-size companies in the Kansai region, will wear the outfits until around Dec. 25 and then continue to scale the wall in different attire, according to Keihan Electric Railway Co., which owns the building.

The robots attracted many visitors at the expo, which ended in October, and their ceaseless performance reflectes the image of hardworking Japanese.