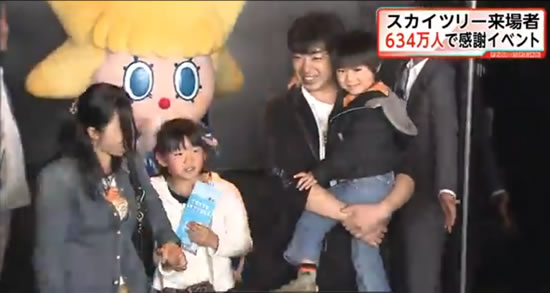 Tokyo Skytree attracts 6.34 million visitors just ahead of its 1st anniversary of opening

The number of visitors to the observation deck of Tokyo Skytree, the 634-meter high landmark, has reached 6.34 million just ahead of the 1st anniversary of its opening. It opened on May 22nd last year and is the world’s tallest broadcast tower. On Monday, a ceremony was held on the observation deck, which stands at 350 meters. The 6.34 millionth visitor was among a family of four from Chiba Prefecture who arrived at the deck shortly after 10 a.m. Hiroshi Komine, 45, his wife Naomi, 45, their 9-year-old daughter Arisa and 5-year-old son Seiya were presented with a model of the Skytree tower.


The 45-year-old father, Hiroshi Komine, said it was his first visit to the tower with his family, and it has become a good memory. The operator of Skytree says the number of visitors to the tower has been almost 20 percent higher than expected. The observation deck, which stands at 350 meters, is popular for its panoramic view of surrounding areas as well as its glass floor that allows visitors to see directly beneath.