Tokyo Gas and Panasonic have jointly developed a new model of their “Ene-Farm” home fuel cell. The “Ene-Farm” fuel cell co-generation systems generate electricity through a chemical reaction between oxygen in the atmosphere and hydrogen extracted from city gas, and the heat generated as a byproduct of this process is also used for home heating and hot water supply. This system is extremely eco-friendly. Since the electricity is generated and used at the same place, there are no losses in transmission. The new “Ene-Farm” fuel cell offers a rated generation efficiency of 40% (LHV), representing a further improvement on the existing range of products with over 37% (LHV) efficiency, the highest in the world to date. The system configuration of “fuel cell unit” has been greatly simplified and the core components such as the “stacks” which generate electricity have been significantly downsized. 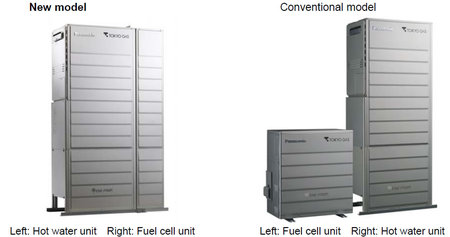 Also, all heat produced during electricity generation can be used without waste. Compared to conventional method of using electricity from thermal power plant and hot water supply and heating using city gas, the fuel cell system allows primary energy consumption to be reduced by approximately 35%and CO2 emissions by approximately 48%. These cost-saving efforts have allowed Tokyo Gas and Panasonic to significantly lower the recommended retail price of the new system to 2,761,500 yen ($33,525/) (including tax; excluding installation fee), a saving of as much as around 700,000 yen ($8500) compared to the current models. The new product is manufactured by Panasonic, and will be sold by Tokyo Gas from April 1, 2011.Since the launch of the world’s first “Ene-Farm” products in May 2009 through January 2011, Panasonic has shipped a total of approximately 5,000 units throughout Japan, of which approximately 4,000 have been sold by Tokyo Gas.