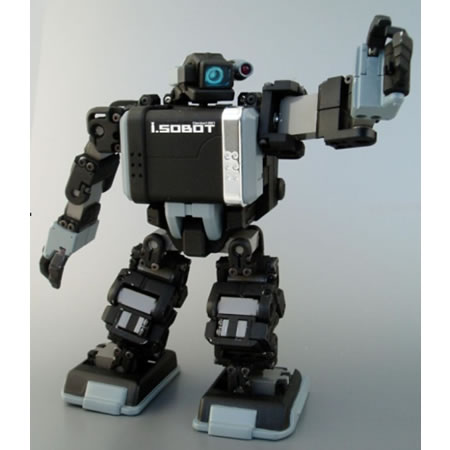 Japan’s toy giant Tomy announced that the world’s smallest humanoid robot i-Sobot will go on sale in Japan at a cost of 30,000 yen (250 dollars) on October 25. An English-speaking version will go on sale shortly afterwards in the United States. The company chose to make the Japanese-speaking robot white and the US version black.The world’s smallest humanoid robot “i-Sobot”, 165-mm in height, weighs 350g and is equipped with 17 micro actuators and a gyro-sensor to keep its balance and perform dancing. The i-Sobot, is able to make some 200 physical movements, including somersaults and other complex acrobatics, speaks some 180 words and responds to verbal commands. Japan has one of the world’s oldest populations as more seniors live longer and many young people decide that starting families would impose a burden on their careers or lifestyles.

As the number of children decreases in Japan and developing countries Tomy feels that to maintain their market share they will have to reach out to adults and lift the barriers between toys and high-tech products. Lots of adults dream of buying a real robot but find it very difficult as they cost thousands of dollars. Tomy feels i-Sobot will be able to fulfill their dream. World’s smallest humanoid robot i-Sobot will be the first product sold with Sanyo Electric Co.’s next-generation rechargeable Eneloop battery. Tomy hopes to sell 50,000 units in Japan and 300,000 worldwide.