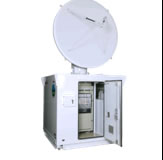 Toshiba has developed and delivered the world’s first operational weather radar system that replaces electron tubes in the transmitter with a high-power semiconductor module. The new radar is only one sixth the size of conventional equipment but offers comparable output power, along with improved waveband efficiency and enhanced features. The first unit of the new system has been installed at the Hydrospheric Atmospheric Research Center at Nagoya University, Japan. The Nagoya radar operates in the 9GHz frequency band (X-band) and is the first solid-state weather radar to go into practical operation. While the new weather radar is much more compact and offers much higher performance than conventional systems, it maintains the same level of output power by adopting a combination of gallium nitride (GaN) power field effect transistors (FET) and pulse compression technology, which strengthens peak output power. Implementation of fully digital data processing suppresses the spurious level, allowing the frequency separation required for interference suppression to be shortened to one fourth. This contributes to efficient use of crowded radio frequencies.

As the new radar does not use electron tubes, which have to be periodically replaced and disposed of, it reduces environmental loads, meeting Toshiba’s goal of maximizing the eco-efficiency of its products and systems.Toshiba will market the new high-power semiconductor-based weather radar in both 9GHz band (X-band) and 5GHz band (C-band) versions, both in Japan and overseas, including sales of individual modules that build the system.