Toshiba has developed a high resolution photoresist (photo-sensitive film) essential for future application of EUV (extreme ultraviolet) lithography in semiconductor fabrication, and proved its viability with the world’s first 20nm-scale generation process technology. As semiconductor process technology advances and wiring densities get even higher, use of conventional polymer photoresists—the base materials for conventional semiconductor resist—will face hurdles. By the time lithography technology advances into the 20nm-scale generation, use of today’s argon fluoride laser exposure apparatus and polymer photoresists will result in difficulties in achieving required resolutions. The solution lies in a transition to EUV lithography and photoresist based on low molecular materials. 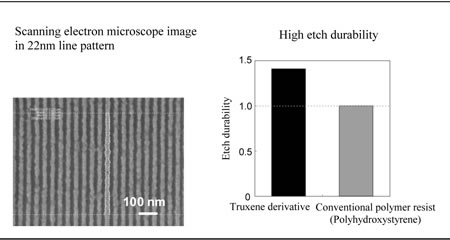 Toshiba will further improve the performance of the molecular resist and apply it to the fabrication of 20nm-scale generation LSIs. According to the International Technology Roadmap for Semiconductors (ITRS), high volume production of this generation is expected to start in 2013. This achievement will be announced at 22nd International Microprocesses and Nanotechnology Conference on November 19.