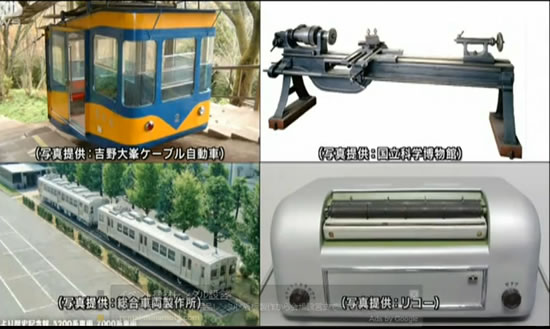 The Japan Society of Mechanical Engineers has selected Toto’s Washlet G toilet seat with warm-water shower unit for cleaning launched in 1980 as an addition to its heritage list, along with four other products. Toto used to import U.S.-made medical toilet seats designed to treat hemorrhoids, but these did not sell well. So in 1978, the company decided to develop its own products, adapting the nozzle angle, water temperatures and volumes to accommodate Japanese bodies. Washlet is a registered trademark of Toto, referring to electric toilet seats with water spray feature for washing.


For its 2012 mechanical engineering list, the society also picked the Yoshino-yama Ropeway in Nara Prefecture, the Ricopy 101 desktop copier, developed by the predecessor of camera maker Ricoh Co., Tokyu Corp.’s 5200 EMU and 7000 EMU stainless steel railcars, and Ikegai’s standard Engine lathe No. 1, the oldest power lathe in existence in Japan, made by the founding brothers of Ikegai Corp.