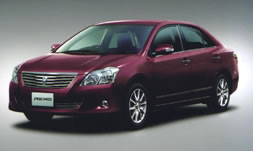 Toyota Japan announced today the nationwide launch in Japan of the completely redesigned Premio through Toyopet dealers, and completely redesigned Allion through Toyota dealers. The first-generation Premio and Allion, launched in December 2001, were five number sedans that appealed to customers with their styling that evoked class-surpassing quality, roomy interior, user-friendliness and outstanding driving performance. The redesigned, second generation models unveiled today were designed to further enhance the appeal of these products, to the extent that they become all that a “five-number” sedan can possibly be. The exterior possesses a sense of luxury and presence, while the newly lengthened and widened interior displays an enhanced feeling of quality and space. In addition, numerous advanced and innovative features have been adopted for even greater convenience, including a Smart Entry & Start System, a color rear-view monitor and an HDD navigation system compatible with G-BOOK mX, the latest version of the G-BOOK telematics service.

The new 1.8-liter engine and Super CVT-i (Super Continuously Variable Transmission-intelligent) transmission provide superior cruising performance. The redesigned vehicles also boast safety and environmental performance at the top levels of their class2.In addition to the vehicles equipped with 1.8-liter and 1.5-liter engines launched today, Toyota plans to add a 2.0-liter engine model in the winter of 2007.