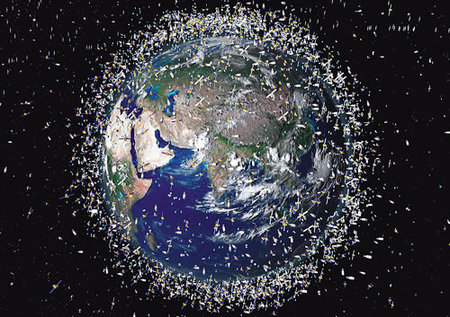 This computer-generated image released by the European Space Agency on Tuesday shows trackable objects in Low Earth Orbit (LOE) around Earth. There are now more than 12,000 objects that are monitored in orbit, 11,500 pieces of which are in LOE, which is at an altitude of between 800 and 1,500 km, where there are many commercial, military, scientific and navigational satellites. In low orbit, debris can stay adrift for decades before they eventually burn up in Earth’s atmosphere.

Another 1,147 pieces are in geostationary orbit at an altitude of approximately 35,786 km, where telecommunications satellites are typically deployed.