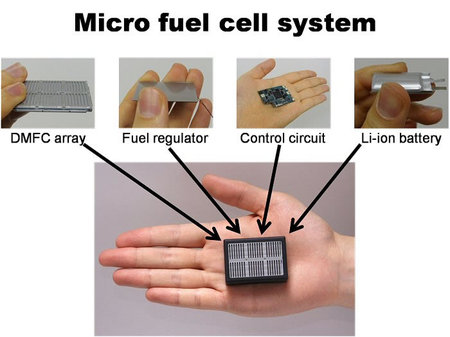 Watch 14 hours of 1seg movie continuously on mobile phones with 10mL of methanol!

Sony prototyped an Ultra small Hybrid Fuel Cell small enough to fit in one hand. This is the first time that Sony revealed the prototype of a practical fuel-cell system including, for example, a secondary battery and control circuit. The new fuel-cell system is direct methanol type and uses methanol as fuel. Also, it is an active fuel-cell system, which controls fuel supply with a pump. The system is hybrid type with the output supplemented by a Li-polymer secondary battery. And it can deal with steeply rising peak powers of mobile devices. The fuel cell’s instantaneous output can be as high as 3W. The new Sony Ultra small Hybrid Fuel Cell’s use efficiency of energy is high enough to watch 14 hours of 1seg movie continuously on general mobile phones with 10mL of methanol!

The size of the prototyped fuel-cell system is about 50 × 30mm, which was realized by combining a fuel cell, Li-polymer secondary battery, control circuit and so forth. As for the fuel cells for mobile devices, Sony has already announced the evaluation results of a fullerene-type solid polymer electrolyte membrane and MEA (membrane-electrode assembly) developed with the membrane. This time, the company expects to commercialize the new fuel-cell system.