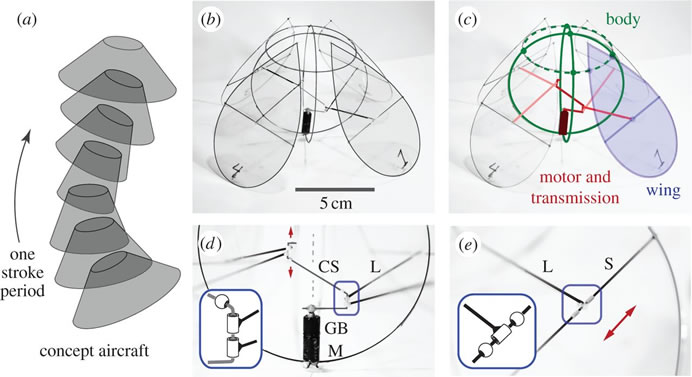 Scientists in U.S. have built the world’s first jellyfish aircraft. The tiny, ultra-light lab machine, weighing just 2.1 grams, is the first man-made flying object to hover and move with a motion like that of the jellyfish in water, the inventors believe. The jellyfish aircraft uses four petal-shaped wings, each eight centimeters long, that when folded together form a downward-facing “cone.” A tiny motor, attached to a crankshaft, causes the wings to push outwards and then downwards, 20 times a second, forcing out air through the bottom of the cone. The materials to make the machine are all over-the-counter components—light carbon-fiber ribs to hold the motor and provide the frames of the wings, which are covered by transparent Mylar film—bought at ordinary modelling stores. The result is an ornithopter, or flying machine that hovers with great stability, without the need for constant, energy-draining correction.

In its present state, the jellyfish aircraft is a proof-of-concept device aimed at testing that the idea works. New York University has already filed a patent. The next step will be to add a battery—the prototype is powered by a fine electrical wire—and remote control. The invention is reported in the Journal of the Royal Society Interface, published by the Royal Society, Britain’s de-facto academy of sciences. The feather-weight craft still needs an official name.