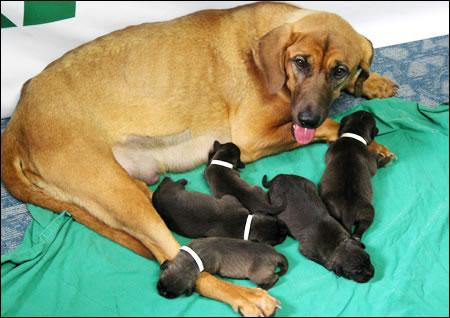 A team of South Korean scientists have successfully cloned five puppies of a dead pit bull, the world’s first commercially cloned pets. Researchers led by Seoul National University (SNU) scientist Lee Byeong-chun announced that five puppies, genetic copies of “Booger” who died in 2006, were born to two surrogate mothers at their laboratory in Seoul last Monday. They were created using a method called somatic cell nuclear transfer. Genetic material from the dog’s ear was transferred to eggs with removed nuclei, which were then inserted into the uterus of surrogate dogs. One of the puppies was born through a Caesarian section, while the other four were delivered naturally by the other surrogate mother, according to RNL Bio.
Press Release after the jump

RNL received the orders to clone Booger by the late dog’s American owner Bernann McKinney. McKinney was to pay $150,000 for a clone of Booger, although RNL later offered her a discount and will be paying $50,000. Now, she looks to be getting three for the price of one, with the remaining two puppies staying at Lee’s lab for research purposes.