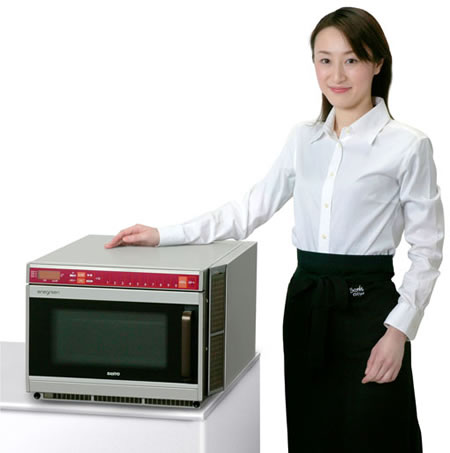 SANYO announced today the successful development of the world’s first simultaneous microwave and induction heating (IH) cooking function. The “enegreen Hybrid Cooker” not only makes cooking faster while preserving the flavor of food, but reduces CO2 emissions. Sales of this new unit will start in Japan in April 2007. The new enegreen Hybrid Cooker combines the functions of an IH cooker, like the type used in conventional ovens that cooks from the outside-in, and conventional microwave appliances, that cooked from the inside-out, not only allows cooking-time to be less time- and labor-intensive, but also maintains a delicious taste through superior cooking. By changing the type of pot or saucepan used, various menus can be created through IH and microwave cooking, such as baked, boiled, steamed, and simmered foods. By using the enegreen Hybrid Cooker at convenience stores, fast food restaurants, and other restaurants that support the food service industry, not only will the number of delicious recipes increase that can easily be promoted to customers, but each company will be able to contribute to the global environment by drastically reducing the amount of CO2 emissions through the use of low-energy cooking.

Sales of the Sanyo World’s First Microwave and IH Simultaneous Cooker enegreen Hybrid Cooker will start in Japan in April 2007 for approximately 624,750 Yen ($5,187)