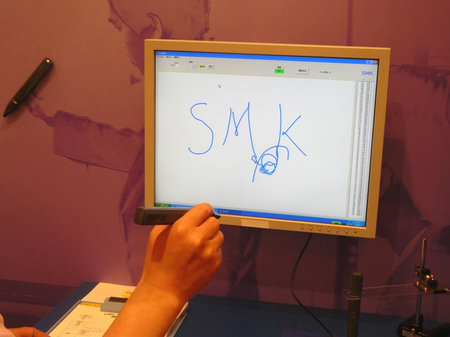 The Wireless Input Pen developed by SMK Corp can transmit characters written in the air and displays them on a monitor. The SMK Wireless Input Pen has a built-in triaxial acceleration sensor and Bluetooth function. The sensor detects the positional information and recognizes the inputted characters. The characters are wirelessly transmitted to a monitor via Bluetooth. The maximum transmission distance is reportedly about 10m. The pen can be used in place of a laser pointer in sales presentations. According to SMK, it is the world’s first pen-type device that can transmit characters written in the air to a monitor and the company is currently applying for a patent.

SMK’s Wireless Input Pen was exhibited at the company’s exhibition “TEXPO 2008,” which took place in Shinagawa, Tokyo from June 4 to 6, 2008. Anoto AB of Sweden and CandleDragon Inc have prototyped a pen that can transfer characters written on paper to a monitor, etc