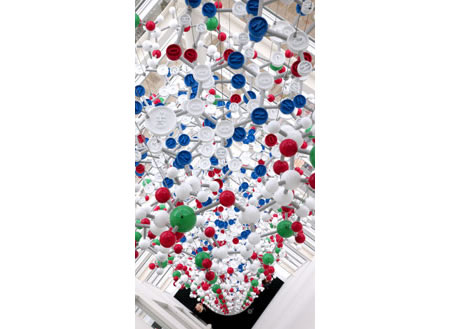 A 22.54-meter-high model of a DNA molecule built by Konan University has been recognized as the worlds largest by Guinness World Records. The model, completed in May last year, reproduces the double helical structure of the deoxyribonucleic acid. It is 1 billion times larger than an actual DNA molecule. A section of glass wall that spans the second to seventh floors of the school’s Frontier Institute for Biomolecular Engineering Research building serves as the display case. The model is illuminated at night and can be seen from outside the university’s Port Island campus in Chuo Ward.

The institute spent about four months building the model to show that it is at the forefront of DNA research. It consists of about 4,000 spheres and disks, which represent elements such as nitrogen and carbon. The previous champion, at 21.5 meters, was produced by a British university.