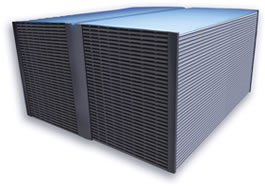 Delphi Corporation has installed two air conditioning units, each one representing the world’s largest application of the Delphi Heat and Mass Exchanger (HMX) cooling component at its Thermal Plant 7 facility in Lockport, N.Y. The system will simultaneously deliver superior cooling and ventilation while minimizing energy consumption and cost as compared to traditional air conditioning systems, particularly during periods of peak demand. The Delphi HMX is a water-fueled air conditioning component that yields cooling systems with significantly improved efficiency and performance. Delphi HMX-driven systems do not require a compressor or the use of chemical refrigerants, making them environmentally friendly. The only power required is for the fan used to generate airflow.

The cooling capacity and Energy Efficiency Ratio (EER) of an HMX application increase as the outside temperature gets hotter, a feature that dramatically reduces power consumption during peak demand when power costs the most. The HMX-based systems at the Lockport facility allow Delphi to showcase technology while delivering superior cooling, cost and environmental benefits.