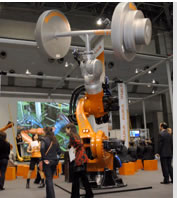 The 2007 International Robot Exhibition, the world’s largest exhibition focusing on robotics, opened Wednesday at the Tokyo International Exhibition Center in Ariake, also known as Tokyo Big Sight, for a four-day run through Saturday. The event, the 17th of its kind and held every other year since 1973, is organized by the Japan Robot Association and Nikkan Kogyo Shimbun Ltd. It showcases robots made by 199 companies and 66 organizations in and outside Japan, including humanoid and manufacturing robots and humanoids.