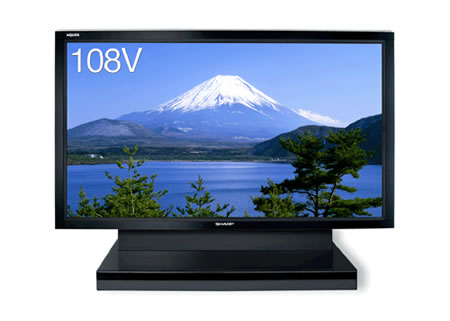 Sharp has successfully developed a 108V-inch LCD TV, the world’s largest with a prototype model exhibited at the 2007 International CES. The Sharp108V-inch LCD screen, which measures 2,386 H by 1,344 V mm, features a Black Advanced Super View Full-Spec HD LCD Panel is manufactured at Sharp’s Kameyama Plant No. 2- the first plant in the world to use eighth-generation glass substrates. At the foot of the Suzuka Mountains in Mie Prefecture, surrounded by nature’s greenery, stands Sharp’s Kameyama Plant. This revolutionary plant is the world’s first vertically integrated production facility, carrying out everything from manufacture of LCD panels to final assembly of TV. To meet the growing demand for large-size LCD TVs, Sharp Corporation will start operation of a second production line at its Kameyama Plant No.2 from January 2007, and will expand its production capacity to thirty thousand substrates per month, double the current production capacity of fifteen thousand substrates per month.

The success of this development means that it is now possible to produce LCD TVs in all sizes from 13V-inches to the super-large-size class, and that LCD is the predominant display device in the flat-panel television market, for which dramatic growth is forecast in the future.