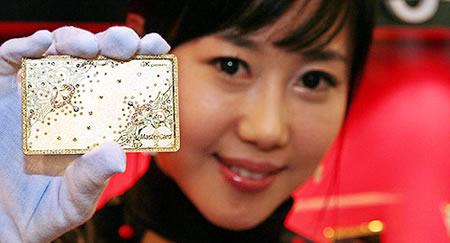 World’s most expensive credit card is studded with 333 diamonds!

A model shows the world’s most expensive credit card at the 2007 Cartes & IDentification Show in Paris, France on Thursday, the last day of the three-day show. Made by GKPower, the credit card is studded with 333 diamonds. GK power has also designed a diamond-encrusted credit card that will attract so-called “VVIP” clients.

The luxury High End card developed by the Seoul-based company has 1mm by 1.65mm diamonds embedded into a silver rivet on a black high-gloss card. GK Power has also produced a black and gold embossed card with embedded diamonds which, entitled the Royal Legend, is supplied only to royal Middle Eastern families through a contract with Dubai First Bank.