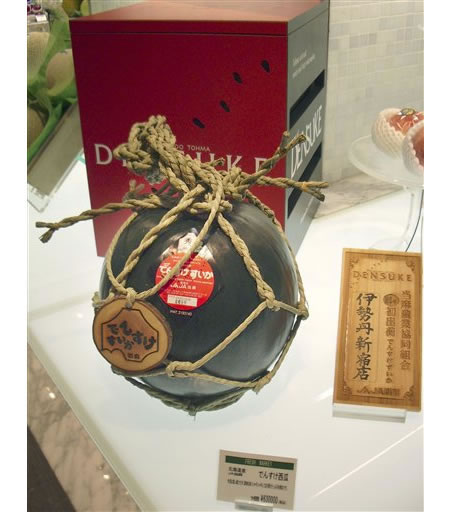 World’s most expensive watermelon sold for US$6,100 in Japan

The 8-kilogram premium “Densuke” watermelon, grown only on the northern island of Hokkaido was auctioned in northern Japan for a record 650,000 yen (US$6,100) today, making it the most expensive watermelon ever sold in the country — and possibly the world. The black jumbo watermelon was purchased by a marine products dealer who said he wanted to support local agriculture. In a country where melons are a luxury item commonly given as gifts, the watermelon’s hefty price tag follows another jaw-dropping auction last month, where a pair of “Yubari” cantaloupe melons sold for a record 2.5 million yen (US$23,500).

The watermelon was the first of 65 sold as part of the season’s initial harvest and one of 9,000 expected for the entire year. Unseasonably warm weather in April and May helped boost sugar content and overall quality of the watermelons this year. Other Densuke watermelons will retail at department stores and supermarkets for a more modest 20,000 yen to 30,000 yen (US$188 to US$283).