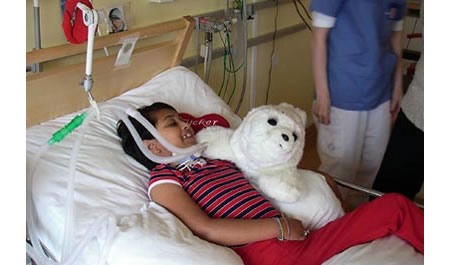 A Japanese-made therapeutic animal robot, named “Paro,” is set to make its debut in the United States. The cuddly harp seal, certified by the Guinness Book of World Records in 2002 as the world’s most therapeutic robot, is believed to have curative effects on patients with depression and dementia. Paro shows various responses to people when they stroke or talk to it. The robot made its debut in Japan in 2005, and cumulative sales have exceeded 1,000 units.

In Japan, the therapeutic robot paro is used mainly at nursing care facilities. It is also rented for research purposes at medial and welfare institutions in Europe. The therapeutic animal robot will be priced at 5,000 dollars per unit in the U.S. market.