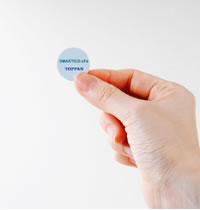 Toppan,Japan has developed “Smartics-cFe,” a coin-shaped contactless IC card that supports “FeliCa” technology, and will begin sample shipments from April 10, 2008. Of its built-in 4-Kbyte memory, user area accounts for 2.4 Kbytes as in standard IC cards. Toppan said it realized the shape of a coin by downsizing the antenna through its proprietary antenna design technology and packaging technology. Expected applications for the IC card are entrance certificates and membership cards for amusement facilities, keys to condominiums and hotels, point cards for stores and electronic tickets, for example. The IC card can also feature transportation ticket and electronic money capabilities. 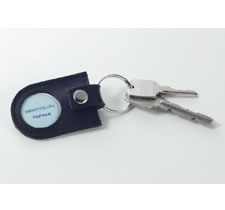 Toppan has enabled to mount contactless IC card functionality on small accessories such as mobile phone straps and key holders. Two models measuring 26.6 and 22.6mm in diameter, respectively, will be available. Volume production and shipments are slated to start some time in 2008. Pricing for a sample is about ¥3,000 (US$29.3). Toppan has kept a sales goal of 100,000 cards for fiscal 2008.