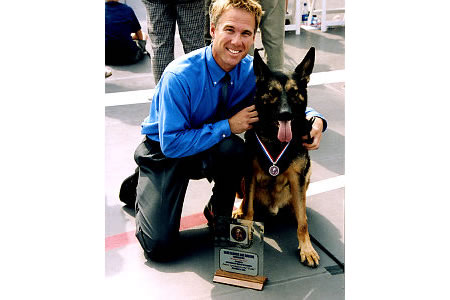 WTC hero police dog Trakr to be cloned in Korea

A Korean cloning research team headed by Dr. Hwang Woo-suk, will clone WTC hero police dog that helped rescue victims of the Sept. 11, 2001 attacks on New York. BioArts International, a California-based bioengineering company has selected Trakr as the winner of its “Best Friends Again” contest to find the world’s most “clone-worthy” dog and will arrange for him to be cloned for free. A German shepherd, Trakr played a big role in locating the last human survivor of the attacks under 10 m of debris at Ground Zero. Now aged 15, the dog can no longer use his back legs due to a degenerative neurological disorder that is linked to exposure to toxic smoke at the site, claims his handler James Symington, a policeman who submitted Trakr’s story to the contest.

BioArts says that within 30 days it will send a sample of Trakr’s somatic cell genes to Hwang’s team at the lab of its Korean partner, Sooam Biotech Research Foundation. A Sooam researcher said they expect the cloned dog to be born by November