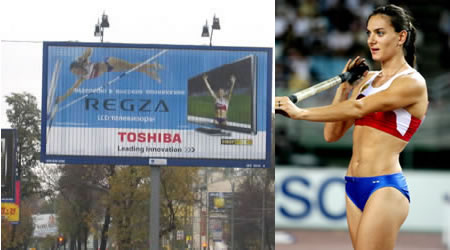 Toshiba Corporation expects to reach new heights in the fast growing Russian market with an advertising campaign that will feature Yelena Isinbayeva, one of the world’s most famous athletes. In a series of ads that will run from October onwards, Ms. Isinbayeva, the world record holder in the pole vault, will promote Toshiba’s entire Russian product line-up, starting with PCs and smartphones. Ms. Isinbayeva started her relationship with Toshiba by attending the Moscow press conference held earlier today to unveil new LCD TVs.

By working with Ms. Isinbayeva, one of the most recognized and admired women in Russia, Toshiba will take its print and TV advertising to a higher level, starting with the new line-up of REGZA LCD TVs and the first Toshiba smartphone launched in the Russian market. The campaign will ultimately be extended to PC and home appliances and will center on TV and outdoor signboards. Yelena Isinbayeva is one of the most popular athlete’s active today. This current world record holder in the women’s pole vault has broken her own record 20 times.