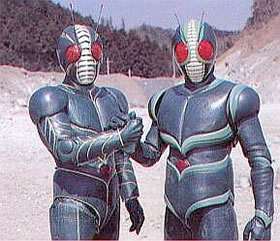 Remember Kamen Rider from your childhood? It has been 35 years since the debut of the action superhero and to celebrate the 35th anniversary, Zippo has made a collection of eight lighters with designs of the seven Kamen Riders on them. Zippo only manufactured 100 of them, so they are certain to become a collectible item in times to come. Kamen Rider translated as Masked Rider, was a popular and seminal sci-fi story conceived by renowned Japanese comic book creator Shotaro Ishinomori .It debuted as a tokusatsu television series on April 3, 1971. 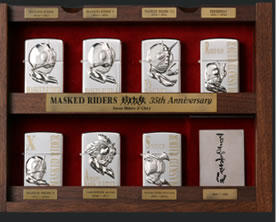 A manga adaptation was also featured in Shonen Magazine around the same period. The series has spawned many sequels and evolved into a widely popular franchise which is still going strong after 3 decades. The Zippo collection of eight lighters with designs of the seven Kamen Riders on them is available for 367,500 Yen ($3096).
Source Zippo (Japanese)