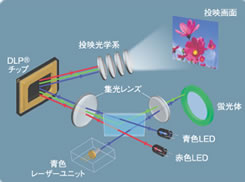 Casio plans to release two new data projectors—the XJ-H1650 and XJ-H1600. Equipped with Casio’s original Laser & LED Hybrid Light Source, which combines lasers, phosphors, and LEDs, these Casio projectors deliver high-brightness projection of 3,500 ANSI lumens. The new Casio XJ-H1650 and XJ-H1600 models coming in June boast the same excellent features of the Laser & LED Hybrid Light Source- including the light source life of about 20,000 hours and quick powering on and off — while improving the brightness to an astonishing 3,500 ANSI lumens. These high-grade models also feature various innovative functions such as Intelligent Brightness Control, which automatically adjusts the brightness to suit the environmental lighting conditions, and the ability to project 3D images, as well as a fully connectable interface.

Casio released the first projector to use its original Laser & LED Hybrid Light Source in the second quarter of 2010. The projector achieved high brightness of 2,500 ANSI lumens without using a lamp containing mercury, a substance which has a negative effect on the environment. In the fourth quarter of 2010, Casio took the next step by using the new light source in a new 3,000 ANSI lumens model. That model has since gone on to earn a strong reputation as a next-generation projector.