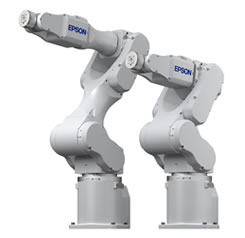 Seiko Epson will release a new series of vertical six-axis industrial robots on December 21, 2012. The two industrial robots in the new series are C4 and the C4L. The C4 can handle payloads up to 4 kg and boasts a 20% shorter cycle time (with a 3-kg payload) than its predecessor, the C3, which Epson released in July 2009. The C4L is a slim, long-arm (900 mm) model that maximizes space efficiency. . Like their predecessors, the C4 and C4L are highly compact and operate at high speeds with outstanding precision, making them ideal for tasks such as electronics assembly and automotive parts transport. However, the C4 and C4L deliver even higher throughput and can handle even heavier payloads.

The C4 has a 600-mm horizontal reach (to wrist center), while the C4L is an extended-reach model that has an arm length of 900 mm. These speedy, slim, lightweight manipulators can also be used in machine-tending applications, to load and unload lightweight objects to and from processing machines or small molding machines.