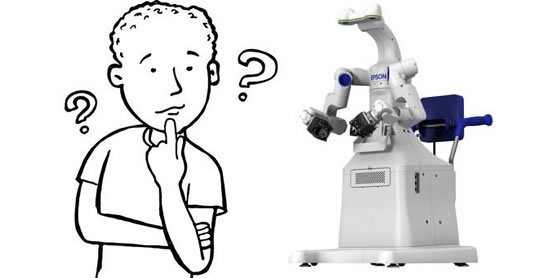 Epson has developed an autonomous dual-arm robot prototype that expands the range of tasks that can be automated on the production floor. Epson’s autonomous dual-arm robot is able to accurately recognize the position and orientation of objects in three-dimensional space, much like the human eye. The two robot arms are equipped with newly developed force sensors that give the robot human-like control over the force exerted by the arms, enabling the robots to transport and assemble objects without damaging them. The robotic arms will come standard equipped with a multipurpose end effector that can grasp, clamp, and insert objects of various shapes and sizes. The robot can be made to perform a wide range of tasks simply by teaching it objects and task scenarios.

The autonomous dual-arm robot was developed not to be integrated into a system and anchored in place to perform tasks like an ordinary industrial robot but to independently perform simple tasks such as assembly and transport in place of human work. Epson plans to make a commercial version of the robot available within the 2015 fiscal year (ending March 2016). The robot prototype will be unveiled at International Robot Exhibition 2013, to be held from November 6 to the 9 in Tokyo, Japan.