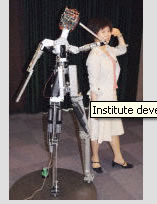 A robot developed by the Robot Research Institute at the New Industry Research Organization,Japan imitates a pose taken by a woman. The 160-centimeter robot can assume human-like postures by simultaneous control of its 16 joints used for limbs, neck, waist and other body parts. The institute hopes the robot will be used for fashion and other promotional events after its metal frame is furnished with polyethylene sheets to give it a human-like look.

The New Industry Research Organization was established in March 18, 1997 in Japan.