A research team at the University of Tokyo has unveiled one of the fastest two-legged robots in the world that can reach speeds up to 4.2 kilometers per hour (2.6 mph). While many robots are controlled using what is known as “zero moment point” dynamics to balance itself, the new robot uses a combination of a high speed camera and a stabilizing motor so that it can lean forward without tipping over, enabling it to run in a dynamic form, according to Prof. Masatoshi Ishikawa. The robot can even perform a somersault.

The leg length of the Actively Coordinated High-speed Image-processing Running Experiment System, or Achires, is about 14 centimeters long and it can take approximately six steps in a second. While it can only run for about 10 seconds now, the team is working on extending that time. Famous in the world of robotics engineering, Prof. Ishikawa’s name may ring a bell: his research group is also responsible for inventing the “janken” robot, which uses a camera to detect human hand movements at astonishing speed and beat anyone in a game of rock-paper-scissors. 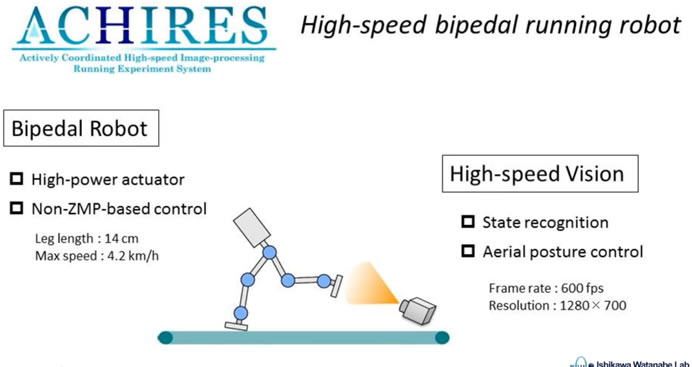