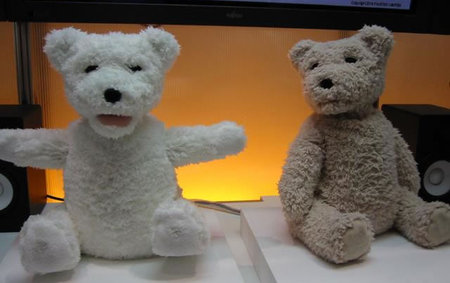 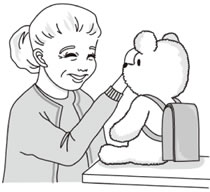 Fujitsu Laboratories has developed a prototype social robot teddy bear with a unique personality and conversational capability, which is displayed at CEATEC Japan 2010. At first glance, the Fujitsu Laboratories social robot teddy bears look just like regular teddy bears but beneath their appearance are a high-tech sensor and ICT technology that enable gentle and therapeutic speech vocalization. The social robot teddy bears have functions that enable them to interact with users and their behavior can be controlled from a PC via a USB port. There is an array of sensors that enable the robots to replicate facial expressions, body language and gestures to match external stimuli. The robots have miniature cameras built into their noses that automatically recognize humans and they respond by facing the person. A built-in voice synthesizer is also incorporated to reproduce the voice of a 3- to 5-year old boy, which is projected from a built-in speaker to provide vocalization in conjunction with the robot’s behavior.

These robots are capable of up to 300 movement patterns including raising arms in delight, looking downwards in sadness, and kicking their feet in a fit of bad temper, while responding to these moods by vocalizing their emotions. Many different kinds of movement can be recorded in PCs connected to the robots, and this means they could be used to act as exercise or game instructors in hospitals or other facilities. Fujitsu Laboratories is planning to put robot therapy to practical use after more of these types of experimental trials.