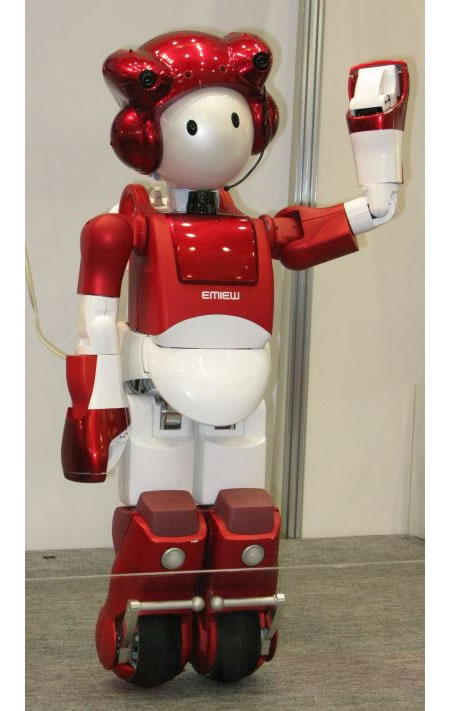 Hitachi exhibited its second humanoid robot EMIEW2 at the recently concluded Hitachi uValue Convention 2008. Hitachi light weight humanoid robot EMIEW2 weighs 13kg and can move on wheels as well as two legs. Sensitive 14 microphones are mounted on the head of the humanoid for enhanced voice recognition capabilities. The robot can distinguish voices even when three people are speaking at the same time thanks to the voice recognition function. The voice recognition function is a combination of sound source separation and sound pattern recognition. In the sound source separation, sounds coming from directions other than the direction from which the voice of the person speaking to the robot comes from are ignored as noise. As a result, the robot can recognize voices spoken as far as 2m away. The robot is 80cm tall, a height for looking over desk tops.

The Hitachi EMIEW2 has a wheel at the bottom of each leg and balances itself to move on flat floors just like the Segway, a two-wheeled vehicle ridden while standing. Basically, traveling on wheels is more efficient than walking. The EMIEW2 features a walking function, so that it can handle differences in floor level of a few centimeters, which wheels cannot.