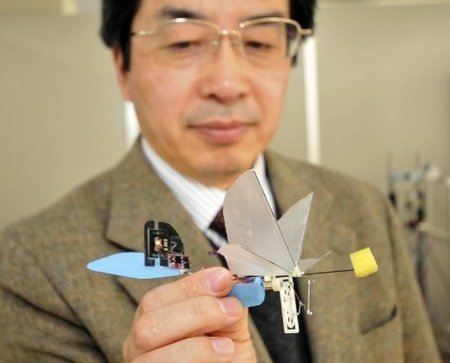 Japanese researchers have developed a hummingbird robot that can flutter around freely in mid-air with rapid wing movements. The robot, a similar size to a real hummingbird, is equipped with a micro motor and four wings that can flap 30 times per second, said Hiroshi Liu, the researcher at Chiba University east of Tokyo. The robot, which weighs 2.6 grams, can fly in a figure of eight more stable than a helicopter with rotor blades. The hummingbird robot controlled with an infrared sensor and can turn up, down, right or left. Hiroshi Liu plans is to make it hover to stay at one point in mid-air, and equip it with a micro camera by March 2011.

The robot, whose development cost has topped 200 million yen ($2.1 million), may be used to help rescue people trapped in destroyed buildings, search for criminals or even operate as a probe vehicle on Mars.