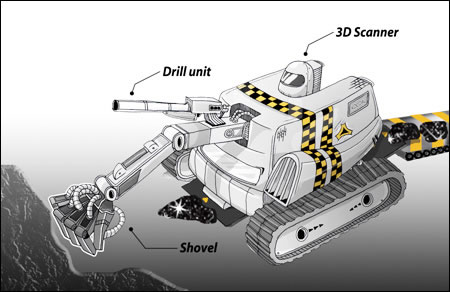 The state-run Korea Coal Corp. (KOCOAL) signed a memorandum of understanding (MOU) on Monday with three Korean engineering institutions and companies, including the Korea Institute of Machinery & Materials, for the development of intelligent coal-mining robots in the science complex in Daejeon. The robots will not only drill in mines but will up- and offload coal onto conveyers for transportation, with operators outside to control them remotely using a three-dimensional scanner attached at the back of the robots. The introduction of mining robots will raise productivity by 30 percent.

The robots will increase productivity by working around the clock and going deeper, which will reduce the risk of human losses from conventional mining, said the mining company. If the project is completed, intelligent coal-mining robots will be put to work in 2013 after six months of trial operation.