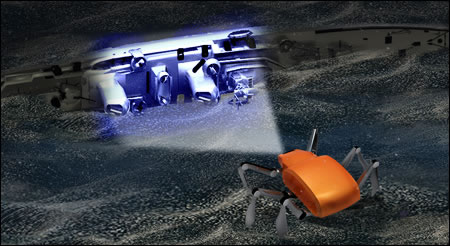 The Korean Ministry of Land, Transport and Maritime Affairs will channel 20 billion won ($17.88 million) over the next five years to develop versatile aquatic robots, which can swim as well as crawl on a seabed 6 kilometers deep by 2015. The versatile aquatic robots will be able to swim at a speed of 18 meters per second and can walk 30 meters per second with its six paddles. The precision camera and acoustic facilities will help the robot to find sunken ships placed where divers cannot easily access. The development of the wireless, automotive robots will be carried out under a two-phase plan. During the first phase through 2012, a shallow-sea vehicle will be created that can maneuver at the depth of 200 meters. By 2015, a prototype will be built that can go as deep as 6 kilometers.

The scheme for the six-paddle locomotive machines has drawn people’s attention in Korea since they could have helped following the sinking of the Navy frigate Cheonan in the West Sea late last month. Dozens of sailors died in the tragedy and eight are still missing. Bereaved families of the dead crew members believe that some of them might have been rescued alive had there been a faster search.