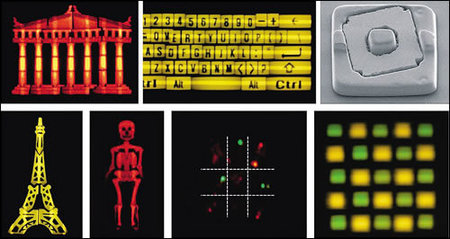 A team of Korean researchers has successfully made a micro-mini computer keyboard with almost 70 100-㎛ components by pouring liquids onto boards. The team led by electrical engineering professor Kwon Sung-hoon of Seoul National University said Sunday that they made a super-mini Eiffel Tower, Greek shrine, and computer keyboard by cutting grooves into boards and pouring liquids containing self-assembling micro-mini components into them. These micro-mini structures are about a couple hundred micrometers (㎛) in size — and one micrometer is a millionth of a meter.

The Korean team combined the robotic and self-assembly methods by cutting grooves into the surface of a board and putting the components into a liquid. The liquid is poured onto the surface and the components move along the grooves to find their places. The new technology could be used to assemble silicon memory chips or to turn living cells or tissues into certain patterns in tissue engineering,” Prof. Kwon said.