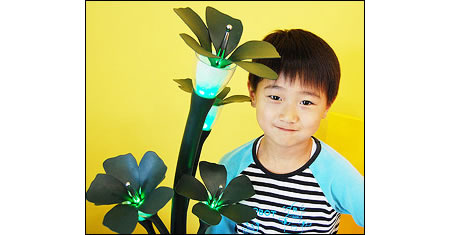 The robot research laboratory at Chonnam National University, Korea has developed a robotic plant that has humidifying, oxygen-producing, aroma-emitting, and kinetic functions. Just like real plants, the robotic plant emits oxygen, moisture, and aroma. It also responds in various ways to stimuli from outside, such as approaching persons, music or light. When a person comes within a 40 cm radius of the flower, its supersonic sensor perceives the approach, the stem bends towards the person, and the buds come into full bloom. When the person leaves, the plant returns to its original state. If a person’s voice becomes louder than a certain level, the flower buds will come into bloom, and the stem shakes slightly to suggest a greeting. When the room lights up, the buds open and close, and when music is played, the plant dances.

The robotic plant was developed using characteristics of plants normally grown for ornamental purposes. It is 130 cm tall and 40 cm in diameter and consists of a pot, a stem, and five buds of a flower reminiscent of a rose of Sharon. American and Japanese manufacturers have produced toy-like robot plants, but this Korean robot has various new kinetic and electronic functions.
Source:-