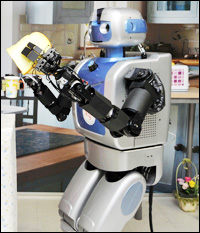 Korean scientists have created a domestic robot-Mahru-Z that cleans up, dumps clothes in the washing machine and even heats food in the microwave. The 1.3-meter, 55-kilogram Mahru-Z an assistant robot developed by the Korea Institute of Science and Technology (KIST), has a human-like body with a rotating head, arms and legs, and is capable of “seeing” three dimensional objects and recognizing jobs that need to be done. The robot, using its moving hands, elbows and six fingers, can pick up a dirty shirt, throw it into a washing machine and push the buttons to get the laundry done. Mahru-Z could also work in tandem with its fellow maid robot, Marhu-M, an earlier KIST creation that moves on wheels, as both machines can be remote controlled through a computer server. Mahru-Z, for example, can put fruit in a basket and put it on the dinner table, while Mahru-M, which has the advantage in mobility, can locate the owner and bring him the fruits directly.

Mahru-Z can recognizes people, can turn on microwave ovens, washing machines and toasters, and also pick up sandwiches, cups and whatever else its senses as objects. Mahru-Z can navigate rooms unattended using its visual sensors, and pick things up on the way. Aside from household chores, Mahru-Z can also be used in conditions too difficult or dangerous for humans. However, Mahru-Z won’t be saving people from their tedious household chores any time soon, as KIST admits it will be a long time before the robot can be mass produced for commercial use.
[Plasticpals]