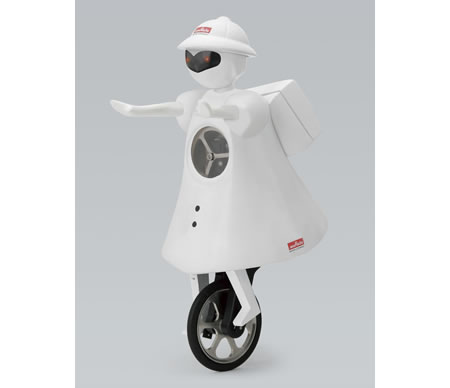 Murata has developed a unicycle-riding robot modeled on the image of a kindergarten girl- MurataGirl (’09 model). The 50-cm-tall robot with Virgo Zodiac sign weighs 6kg. Standing on its lone wheel, the robot can remain stationary, go back and forth and move along a curve by using built-in gyro sensors. MurataGirl maintains her balance by arbitrarily controlling rotation of the wheel for front-to-back direction, and rotation of the fly-wheel built into her chest for side-to-side direction, controlled by signals from the gyro sensor. She can ride at 15cm/sec-three times faster than 2008 model.

Riding direction is detected through signals from the gyro sensor when riding around a curve and distance to the obstacle is determined by measuring the duration of time between transmission of ultrasonic and reception of ultrasonic bounced back from the obstacle. By processing images captured with a camera on the lower part of its body, the robot can control its moves more precisely than previous versions. MurataGirl (’09 model) will be demonstrated at the Murata booth during “CEATEC Japan 2009” held at Makuhari Messe, Chiba prefecture between Tuesday, October 6th and Saturday, October 10th.