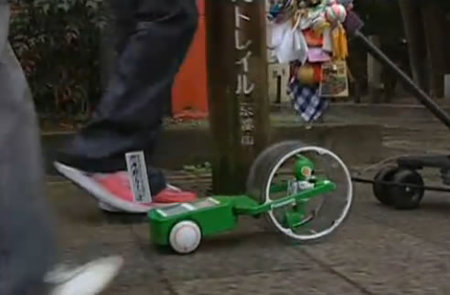 Panasonic’s EVOLTA Robot finished his long journey along the ’53 Stations of the Tokaido’ from Tokyo to Kyoto, one of Japan’s ancient thoroughfares, to cap an additional 500 kilometers to his mileage. Two years ago, EVOLTA Robot climbed a 530-meter rope to the top of the Grand Canyon in 6 hours and 46 minutes. The following year in 2009, EVOLTA Robot finished the 24 hour Le Mans endurance race of 23.726 km and was subsequently recognized in the Guinness World Records for the longest distance covered by a battery operated remote controlled car. 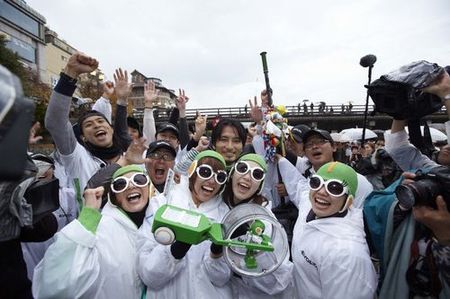 Two alkaline batteries were used for both challenges. This time’s challenge had the EVOLTA robot running on Panasonic’s new rechargeable Ni-Mh AA batteries. Leaving Tokyo on September 23, 2010, EVOLTA Robot stopped daily to recharge its batteries at one of the 53 stations of the Tokaido. The Tokaido is a vital transportation artery connecting Tokyo and Kyoto built in the Edo Period with its starting point at Nihonbashi in Edo (modern-day Tokyo) and its terminus at Sanjo Bridge in Kyoto. The Tokaido stretches for 500 kilometers and had 53 lodging towns along the route in the old days, hence the name “53 Stations of the Tokaido.