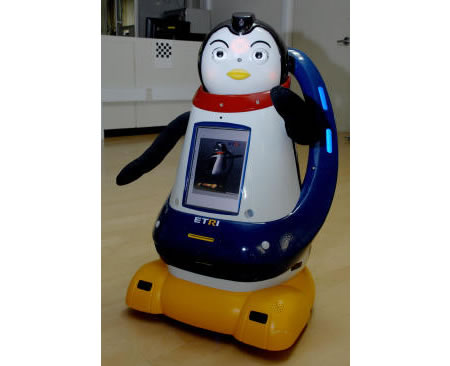 Electronics and Telecommunications Research Institute (ETRI) of Korea has developed a robot with four human senses such as seeing, hearing, touching, and smelling as interactive modalities. Named POMI (Penguin rObot for Multimodal Interaction), the robot can move the eyebrow, eye lid, eye ball and lips. It also uses various colors and formats of LED lights to show face expressions. As the robot has soft arms, its arm gestures are pretty natural and safe to humans. Robot POMI has two kinds of built-in scent sprays to express happiness, sadness, and joy. It also has a heartbeat device which makes people feel like the robot’s heart really beats up when they put the hands on the left chest of the robot. It also can talk to people, short answers in most cases, through a built-in speaker.

Other features making the robot more human-like is laser sensor, side/rear sensor, light sensor, object sensor to recognize and track people. The robot has Polaroid camera, and projector that can be used for movie play.