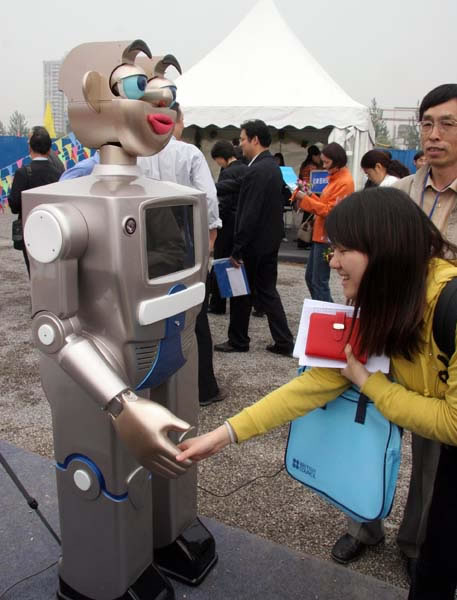 The human-shaped robot developed by Siasun will soon have a job at the administrative examination and approval service center in Shenyang, the capital of the northeastern Liaoning Province, providing investors with help to get their business-related documents. The intelligent Chinese robot will nod head, wave hand, say hi, and communicate with visitors in Chinese. Measuring 1.6 meters high and weighing 50 kg, the robot’s main equipment includes six sets of sonar, one microphone, two LED lights, two driving wheels and a directive wheel. These key parts enable him to walk freely in designated areas, bypass hurdles automatically, receive remote control signals and speak with humans. The Li-ion battery allows the Robot to walk and work for about 10 consecutive hours after two to three hours of charging. The LCD on robot’s chest allows visitors to touch buttons on his screen and learn concerned procedures.

Siasun was established in 2000 and is the first Chinese robot maker with proprietary intellectual property rights. Siasun has so far designed and developed over 30 series of robots for industrial production, including a batch of automatic guided vehicles, or AGV robots. These AGV robots have been widely applied onto production lines in some of the largest car makers in China, including China FAW Group Corporation and Chery Automobile Company. Siasun had won a contract with U.S. giant General Motors to supply AGV robots to its three newly-built manufacturing bases.