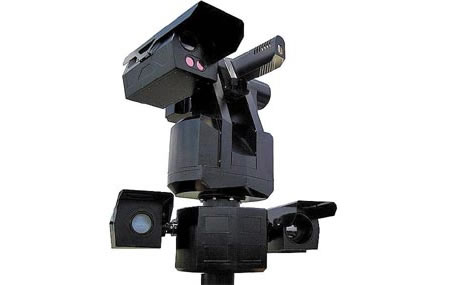 South Korea is trialing a remote-controlled sentry robot capable of carrying out surveillance and combat functions along the military demarcation line. An Armed Robot- SGR-1 was deployed last month at a guard post within the demilitarized zone on the central frontline in Gangwon Province. It is a remote-controlled armed robot with state-of-the-art surveillance equipment. The Armed Robot consists of a camera, a K-4 high-speed machine gun, and a central control system. Each robot is said to cost about W400 million ($200,000). The surveillance camera sends images to the command and control room in real time. When the robots heat or motion detectors sense a possible threat, an alarm goes off in the form of a siren or signal on the screen at the command center. The operator then uses the robots’ video and audio communication equipment to talk with anyone identified by the SGR-1 before deciding whether to fire the 5.5-milimeter machine gun.

Kim Byungki- an international relations professor at Korea University in Seoul said the robots can only help South Korea, given the heightened tension with the North in the wake of the March 26 sinking of the Cheonan warship and the deaths of 46 South Korean crewmen. The South said a North Korean torpedo took down the Cheonan, while the North denied any involvement in the sinking.