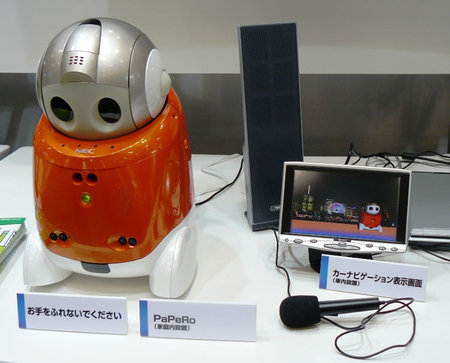 NEC demonstrated the use of its PaPeRo home robot as a human machine interface (HMI) for inputting information, such as the destination and purpose of an outing, into a car navigation system and other devices. According to NEC, the purpose of utilizing PaPeRo as an HMI is to improve user convenience through the use of a home robot equipped with voice recognition and camera functions, instead of using a touch panel or other devices, which are usually used to input information into a car navigation system. For example, when a user in house tells the robot that he is “going to Yokohama on a date,” the robot recognizes that person’s voice and uploads the information to the server via wireless LAN, etc. The server performs an arithmetical operation on the uploaded information in consideration of the dialogue history between the robot and the user, the knowledge information inputted to the robot, the season, the time, etc. 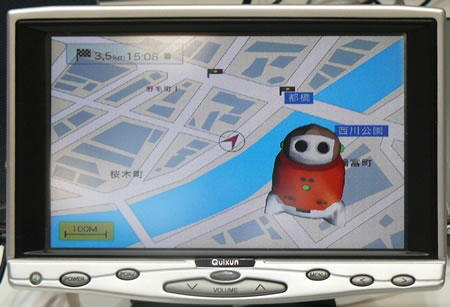 Then, information on the best route for the user to go to Yokohama on a date is calculated, and the result is sent to the user’s car navigation system, etc and displayed on the screen. Therefore, the user only has to get in the car and talk to the robot to reach his destination by the best route. The demonstration was performed at AT International 2008, which runs from July 23 to 25, 2008, at Makuhari Messe in Chiba Prefecture, Japan.